The old Traditions from France are very important to me.

As a French citizen and born in a family of Pastry Chefs (my grand father worked with the famous Pastry Chef “Lenôtre” in Paris and my Godfather is one of the Best Pastry and Chocolate Master of the region of Champagne Ardennes), I celebrate with my family and with the “Petit Peton” Students these traditions. Most of them are centered on Food of course !

We cook with organic food and  French ingredients.

See how the children enjoyed it !

In France, Christmas tree is  popular but its symbolic presence can be felt in the Christmas cake. The traditional French Christmas Cake is a sponge cake prepared in the shape of Yule log and is called the “Bûche de Noël ” meaning “Christmas Log”. This cake is a special feature of the Le reveillon – a grand feast of the season celebrated after midnight mass on Christmas Eve. Some families burn a real log in the fireplace. 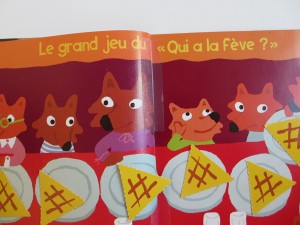 The Twelfth Day of Christmas represents the day on which The Three Kings (Melchior, Caspar and Balthazar) visited Jesus after his birth.
In France, this day is celebrated with a special tradition:

It’s a huge part of French culture. It is sold all throughout January in boulangeries and pâtisseries all over France, to celebrate the Epiphany. The exact day to celebrate it is on January 6th but we like to enjoy this cake for as long as we can in France. In my family, we usually have it on Sundays and if we’re ever invited at someone’s house for lunch or dinner, we bring a Galette des Rois.

The fun part about eating this cake is that we hide a tiny king or queen figurine , called “une fève” inside of it. The person who finds the “fève” in its slice of cake becomes symbolically the “king” or “queen”. In France, bakeries always include a paper crown with the cake that you purchase. 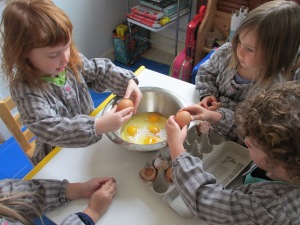 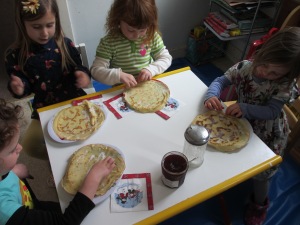 The Catholic holiday of Candlemas, February 2nd, is called in France “la Chandeleur” or jour des crêpes.
Not only do the French eat a lot of crêpes on Chandeleur, but they also do a bit of fortune telling while making them. Hold a coin in your writing hand and a crêpe pan in the other and flip the crêpe into the …air. If you catch the crêpe in the pan, your family will be prosperous for the rest of the year.

Carnival or Mardi Gras is a festive season which occurs immediately before Lent (Ash Wednesday); the main events are usually during February/ March. Carnival typically involves a public celebration or parade combining some elements of a circus, mask and public street party. People and the children often dress up or masquerade during the celebrations, which mark an overturning of daily life.The tradition is to cook “des beignets”, “des Crêpes” and to eat “gras” (fat) before the period of “Câreme”. It’s a great period for the children to dress up and have fun with a lot of pastries and candies. 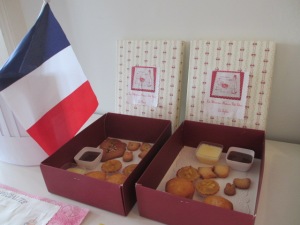